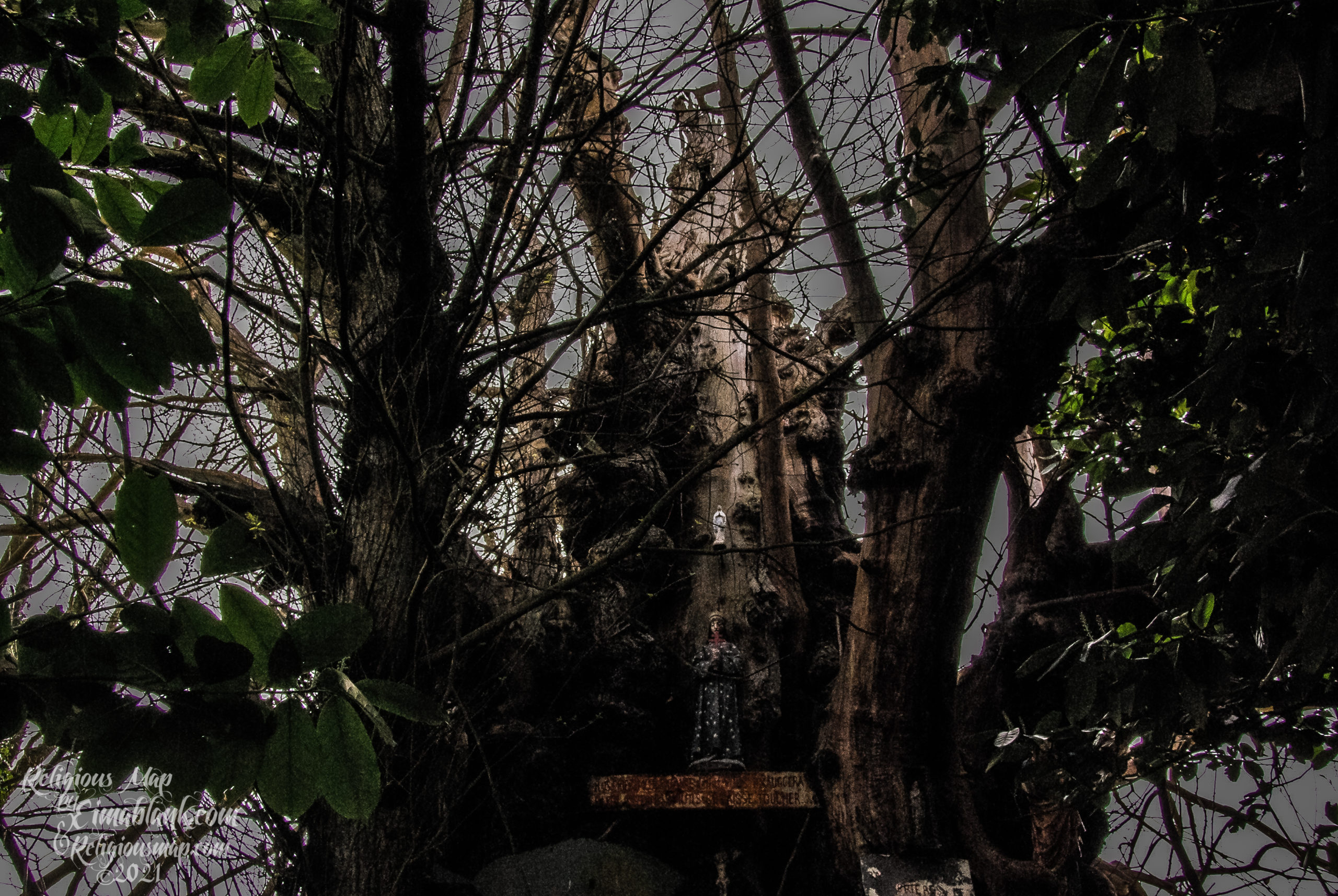 This tree is an architecture with an axiality on Mary and Anna, two large towers on the sides and the contrasts of colors with green leaves at the bottom and aged wood at the top. I photographed this tree in 2008, few steps away from the Abbey of Clairmont in Mayenne, France. The Abbey was built in 1152, just after the Cathedral of Chartres and during this revolutionary epoch of the construction of the cathedrals all around Paris.

The tree is a mystical tree where parish used to go and pray. You can see all my pictures of this tree on Flickr. On the pictures, you will see many votive artefacts that people leave on the tree when they come to pray and we can imagine all the many stories that could bring people to pray, maybe a quest for having a baby, maybe a quest for justice, maybe a quest for love or prosperity. Maybe also few people asking forgiveness. What we see are the many thanks for the prayers that were granted. Maybe some people recovered illness from this tree. Maybe some people have changed from this tree, having some kind of light to reach them in their soul and for ever bring them this confidence of a kingdom on Earth, stronger than any other one.

In 1152, Islam had already emerged from the desert of Mesopotamia and had spread all through the deserts of North Africa to reach Spain and France. Muslims had a book that they called the law, and this book would make people equal below God. The architects of the Cathedral of Chartres have studied in the Islamic universities of Spain and were expanding universities in France such Reims and Chartres. Fulbert of Chartres, who was a pupil of Gerbert of Aurillac, has received the influence of both Christian and Islamic cultures with mathematics and astronomy.

With Chartres, Fulbert of Chartres has developed a new belief in the sanctity of Mary as the mother of all human beings, and people would come to talk to her, tell their secrets, tell their worry, ask for advise and help. She would answer, with the voice of God what means that things happen and people believe that they happen because their asked for it. There is a strong “psychological philosophy” in mysticism if I may say, and religions have changed according to this mysticism as a way to influence people.

The architecture of the cathedrals was a technical, a political, a religious, a cultural and a social revolution in many ways and the influence of Gerbert of Aurillac in Chartres was tremendous but it came from another source of influence that took its roots deeply into the old barbarian cultures. The Celtic calendar for example , relates people to trees and Mayenne is not far from the French Britany.

I don’t know how old was the tree in 2008, but the mysticism around it came from centuries behind our current era and this is what I wanted to capture with my photography, the ancestry of our cathedrals.

This photography has been edited with Adobe Lightroom to change the color of the sky. If you zoom into this picture with Flickr, you will see many nuances and many details. The darkness of the photo brings us almost inside the space of the tree and reminds us of the tree of Jesse. The sky and the leaves are the stain glasses while the stars on the dress of Anna and the white of the dress of Mary attract our sight into this verticality up to the top of the tree. There is a perspective and a profound transparency between the branches that brings a parish into a silence, a meditation and maybe a prayer. In front of a tree half alive, half dead, we can only wonder our future and sometimes, knowing our roots is not enough.